In a recent article, it was estimated that at least $200 billion is wasted annually on excessive testing and treatment. The impact of the overly aggressive, extraneous care is not only financial in nature but also generates mistakes and injuries believed to cause 30,000 deaths each year. In 1979 the founders of the field of behavioral economics,  Amos Tversky and Daniel Kahneman, published the Prospect Theory: An Analysis of Decision under Risk. In this landmark paper, they described the way people choose probabilistic outcomes that involve risk. The key features of this theory are the reference point, diminishing marginal utility for gains, amplified negative utility for losses, and the possibility and certainty effect. These features not only describe many of the options we face in ou

r life but every physician-patient encounter can be considered within this framework. Every encounter is laden with a risk of loss and an opportunity for gain and we are tasked with a predilection towards loss aversion and with a cognitive blind spot for low probability events. In my opinion, these features of the Prospect Theory have a direct application to physician decision-making and can partly explain the epidemic of unnecessary cost in the US healthcare system.

ersion ratio” on average is in the range of 1.5 to 2.5 but tends to increase when stakes rise. Biologically and psychologically, negativity dominates positivity. Our brains contain mechanisms that give priority to bad news and even the anticipation of the potential of bad news.  Negative trumps the positive in many ways and loss aversion is one of the many manifestations of an inherently broad negativity dominance. In anticipation of a potential loss we are driven more strongly to avoid losses than to achieve gains, therefore, golfers putt better to get to par and taxi drivers work longer on a slow day to avoid the loss. The second feature of the Prospect Theory is the concepts of the possibility and certainty effect. The possibility effect is weighing low probability events more than they deserve. This effect only occurs and is especially pronounced when you are thinking about the unlikely event.  On the other end of the spectrum, the certainty effect states outcomes that are almost certain are given less weight than their probabilities justify and cause us to pay a significant premium to achieve the illusion of certainty.  We are almost completely insensitive to variations of risk among small probabilities and our mind is not equipped to distinguish between them.

Every patient encounter can be viewed within this framework. For an emergency physician, the outcome of each patient encounter is an uncertain event with the possibility of gain or loss from the current health status of the patient (neutral reference point). Furthermore, emergency physicians are trained to look for low probability events – especially those that are potentially life-threatening. Therefore, every complaint of chest pain is a potential heart attack or pulmonary embolism and every presentation of abdominal pain is a potential aortic dissection or appendicitis. C 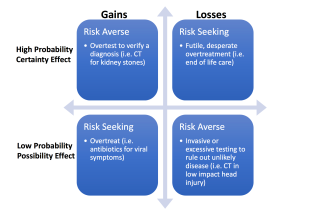 onsequently, we over- test to rule out these low base rate events. As the possibility effect states, we are risk-averse (bottom right) when it comes to losses and become risk-seeking when it comes to gains (bottom left). Conversely, the certainty effect states that we are risk-averse (top left) and overtest to confirm a diagnosis and become risk-seeking (top right) and overtreat with aggressive and futile interventions to avoid a bigger loss.

Atul Gawande wrote about the “avalanche of unnecessary medical care that is harming patients physically and financially”. I, too, have written in the past about the perverse incentive schemes and the profit-driven medical-industrialized complex that is not only costly to the patient but is also a significant cause of iatrogenesis.  However, on the scale of an individual patient-physician interaction where the concerns about the medical-industrialized complex and incentive schemes are often distant from my consciousness, subconscious psychological biases such as loss aversion, the possibility and certainty effect elucidated by the Prospect Theory play a significant role in the epidemic of overtesting and overtreatment that is prevalent in the United States. The father of modern medicine, William Osler, stated that “medicine is the science of uncertainty and art of probability.” However, it is the science of uncertainty which reveals that the art of possibility is beyond the scope of human cognitive capacity and leading to the spiraling of unnecessary, ineffective, harmful, and costly medical procedures. As physicians, we have resources such as the Choosing Wisely campaign and clinical practice guidelines but they are underused not only because they are unintegrated within the electronic health record but these guidelines are either too narrow or too broad to capture the nuances of the interaction at the point of care.

3 thoughts on “Medicine, the science of uncertainty”