When talking about the human mental capabilities, in The Symbolic Species, Terrence Deacon stated that “biologically, we are just another ape. Mentally, we are new phylum of organism.”  This wondrous and unfathomably complex organ – the brain –  has enabled us to become the most dominant species of the planet. With a unique capacity to learn, it can extract concepts from sensory data and internal states and can leverage concepts into flexible representations for use in deductive and inductive reasoning. However, its outputs – technology – have begun to outpace the brain’s capacity to understand it. Consequently, in many domains, complexity overwhelms the capacity of a single or even a group of brains. Therefore, decision making in the modern world is exposed to pitfalls such as psychological biases and statistical miscalculations and prone to distortions from psychological states and environmental (mis)cues. If you extrapolate this to a more limited but more extreme domain such as a chaotic and emotionally charged emergency department that is teeming with the uncertainties and complexities of human pathology, the capacity for errors in judgment increases. Additionally, if you layer in a sleep deprived, circadian misaligned, and cognitively overloaded physician, it does not take a leap of imagination to see that these errors increase additively.

In fact, data has borne out this intuition. Studies show that greater than 250,000 deaths occur each year due to medical error – defined as an unintended act (either of omission or commission) or one that does not achieve its intended outcome. This accounts for nearly ten percent of all-cause mortality and represents the third-highest cause of mortality behind known causes such as heart disease and cancer. Furthermore, despite advances in imaging technology and lab testing, the misdiagnosis rate in the emergency department has hovered between 1 – 12%. Categories of errors range in scope from misdiagnoses and miscommunications at both the individual and systemic levels. Problems related to diagnostic error are the leading cause of paid malpractice claims and are associated with atypical presentations of unusual problems and patients with complex psycho-social-medical histories confounding presentations. Given the empirical and experiential evidence, why is there not more of an impetus to provide cognitive support and amplify the intelligence of frontline physicians?

Intelligence amplification or cognitive augmentation or machine augmented intelligence (IA) might sound experimental, unnatural, or futuristic, but humans have a long history of pursuing intelligence amplification (IA). In reality, the invention of writing 7500 years ago could be among the first technologies to be considered IA. Originally invented in the service of commerce, it enabled us to store, record, and retrieve business transactions along the throughways of the “silk road.” Thereafter, it was exapted for the foundational elements of civilization including science, history, government, and literature by eliminating the limitations of memory.  If you fast forward 7500 years from the foundations of civilization to the modern emergency department, it has become increasingly clear that physicians are sorely in need of similar intelligence amplification. The existing tool that is used to store, index, and retrieve information is the electronic health record (EHR). It has become experientially, anecdotally, and empirically clear that the current iteration of this technology does not provide the cognitive support needed for accurate and timely decision making.

Legendary inventor, Doug Engelbart, laid out his ideas on machine augmented intelligence in his manifesto titled, ‘Augmenting Human Intellect’ in 1963. In it, he expressed a vision of an “integrated domain where hunches, cut-and-try, intangibles, and human feel for a situation usefully co-exist with powerful concepts, streamlined terminology and notation, sophisticated methods, and high-powered electronic aids…[for] more-rapid comprehension, better comprehension, the possibility of gaining a useful degree of comprehension in a situation that previously was too complex, speedier solutions, better solutions, and the possibility of finding solutions to problems that before seemed insoluble.” He envisioned a system that included processes and technology that supplemented rather the supplanted the unique context-awareness and inductive abilities of human cognition that has evolved over millions of years of natural selection. More than fifty years later, this vision of an augmented human intellect is yet 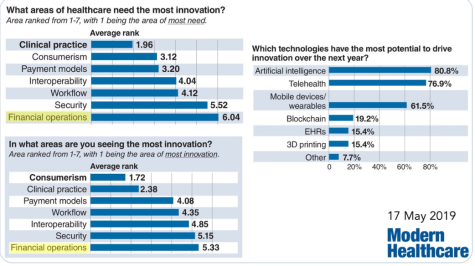 to be realized in the domain of healthcare

As diagnostic errors continue to accumulate in our complex healthcare system causing a staggering toll of harm and patient deaths, augmented human intelligence solutions should be part of the vision of all healthcare institutions. In a recent survey of healthcare CEOs, even though artificial intelligence (often confused with IA) was touted as the driver of innovation, the focus of this innovation was on financial operations. In my opinion, the focus is limited in scope – technological – and misdirected in focus – financial operations. To truly solve the healthcare conundrum we not only require technological solutions but also need to redevelop concepts, standardize terminology, and introduce processes focused on improving clinical decision making.

Medical error—the third leading cause of death in the US