The word iatrogenesis is derived from the Greek language meaning “brought forth by healer.” It is defined as the “inadvertent and preventable induction of disease or complications by the medical treatment or procedures of a physician or surgeon.” Iatrogenesis in medicine has been recognized for as long as Western medical history has been recorded. Approximately 2500 years ago, Hippocrates first coined the phrase “Primum non nocere” or “first do no harm.” The Greek’s only word for drug – pharmakon – did not distinguish between the power to cure and the power to kill. Although we have understood about the power of iatrogenesis for greater than two millennia, the history of modern medicine is filled with examples of iatrogenesis. Recommended treatments such as bloodletting, prescription of poisonous metals like mercury or noxious plants like hellebore to induce purging were common practices. However, as a physician, I almost daily encounter a patient who is impacted by iatrogenesis.

Iatrogenesis is overwhelmingly a problem of over-intervention and our health care system leads the world in medical interventions. We have a higher proportion of women aged twenty to sixty-nine are screened for cervical cancer than in any other nation, we have the highest number of knee replacements performed per year and the number of people living with a kidney transplant. Americans are treated with more catheterizations, more angioplasties, and more bypass surgeries than in any European country. Despite the multitude of interventions and screenings, we are in the middle of the pack in the world in many outcomes of population health. 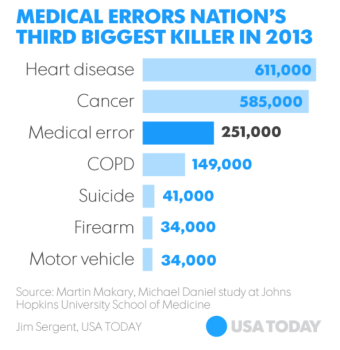 I suspect iatrogenesis might have a role in that statistic. Medical errors in all forms are the 3rd leading cause of death in the United States and a large percentage of those deaths are preventable. For example, one-third of hospital procedures expose patients to risk without improving health, 106,000 deaths per year from non-error, adverse effects of medications, and 12,000 deaths from unnecessary surgeries. It is estimated that 28% of hospitalizations among seniors are due to adverse drug reactions, and 32,000 seniors suffer hip fractures each year due to falls caused by medication-related problems. On average, individuals aged 65-69 years take 14 prescriptions per year (80-84 years take 18 prescriptions per ye Even if some of these statistics are overestimated there is very little denying that the high prevalence of polypharmacy with aging leads to an increased risk of medication errors, poor adherence, drug-drug and drug-disease interactions, and most importantly, adverse drug reactions.

The downsides of iatrogenesis should be at the top or near the top of consideration for every medical decision and intervention prescribed by physicians. Factors such as age, health status, multimorbidity, polypharmacy, patient preference, and disease severity should all be taken into consideration prior to prescribing or not prescribing an intervention. The probability of iatrogenesis increases when an intervention yields small or unclear identifiable gains and large identified (or unidentified) side effects. Conversely, the impact of iatrogenesis decreases exponentially as the severity of disease increases with large gains from treatment over the downsides of treatment. Health care is chock-full of examples of over-intervention in the realm of prevention and treatment. Over-interventions such as carte blanche PSA and mammogram screens, aggressive blood pressure management, treatment or screenings triggered by mild symptoms not only yield negligible returns but also simultaneously increase the exposure to medical error and iatrogenesis. Institutionalized iatrogenesis is leading to a crisis of antibiotic resistance and has made generations of Americans into opioid addicts.

Medicine – incentivized and disincentivized by personal, political, and financial pressures – is a reactive, intervention-driven,  and self-serving feedback loop. We create crises via over-interventions and then scramble to develop therapeutics to treat the aforementioned crises, which in turn, creates a new set of crisis. In my opinion, there is a rightward skewed ‘dose-response–esque’ relationship between the amount of health care an individual consumes and their “health” status. The majority of the gains are derived from a relatively few interventions such as vaccines, sanitation controls, emergency surgeries. After these gains, the vast majority of the population is riddled by the ravages of chronic diseases and medical interventions at best prolong the decline, at worse, hasten the condition via iatrogenesis, and in reality, have a negligible impact on measures of population-wide life expectancy. In fact, the majority of life expectanc

y gains were made prior to the development of pharmaceuticals to treat heart attack, stroke and other forms of chronic illness were even developed. This is not to say, that as we should forego all medical treatment. However, the risks, benefits, and alternatives should be considered for all interventions. Under the current biological paradigm of a relatively poor mechanistic understanding of the complexities of human metabolism and genomics, the medical-governmental complex might derive a better return on investment in creating social, environmental processes that support the body’s evolutionarily developed systems of maintaining homeostasis.

Nothing in medicine is as difficult (for the patient and the practitioner) as realizing nothing needs to be done and following that up with doing nothing at all. Medicine was founded on the desire of patients to be helped and of doctors to help. The difficulty of doing nothing, or of admitting that there is nothing to be done or should be done is overwhelming. Nonetheless, this task becomes nearly impossible when the default setting for the system at large is to intervene first, often, and repeatedly. These institutionalized demands far outweigh common sense, cloud decision making, and ultimately do harm. There is truth to the adage – the tincture of time – and it would serve everyone if we listened to the advice rendered in this adage.

1 thought on “First Do No Harm”