In the human world, ideas and concepts are more robust and impactful than anything organic or material. Concepts and ideas often outlive their originators. As culture, language and their embedded concepts multiply and diverge, exchange and reconvene, they shape our world in unpredictable ways. One concept that has evolved to loom over all aspects of modern life is the concept of evidence. In order to make decisions, we seek ‘evidence of’ and we justify our actions with ‘evidence for.’ The word is derived from the Latin ‘evidentia’ which translates to obvious to the eye or something that is obvious. Historically, it has also referred to anything that gives one ground for belief or assent. For example, it is evident that 2 + 2 is 4. In law, it was used to designate documents relevant to the case or it refers to an indication or token that someone or something, in particular, has been there. For example, the smoking gun is evidence that a bullet was fired. Originally, the concept referred to the obvious and the axiomatic but once incorporated into law and science it evolved to include the contextual and the circumstantial. These latter meanings formed the basis of the scientific method. Derivative concepts such as probabilities and likelihood was built on the foundation of evidence in order to quantify judgments and justifications. Over the last few centuries, this line of inquiry derived from the scientific method, based upon inductive reasoning; going from evidence to theory, has made the previously inevident workings of the world more evident and has caused a historically unparalleled accumulation of knowledge.

Partly due to its successes,  science, including its methodologies and concepts, has enveloped the world and has replaced previous arbiters of truth. We look towards science to uncover and reveal the truth. In medicine specifically, evidence serves as the foundation of judgment and predictions. Systematic collection and curation of evidence have replaced expert opinion. Diagnosis and prognosis are based on evidence rather than on subjective and unsystematic physician expertise. This hegemony is represented by the authority of the evidence-based medicine (EBM) movement in medicine. It is 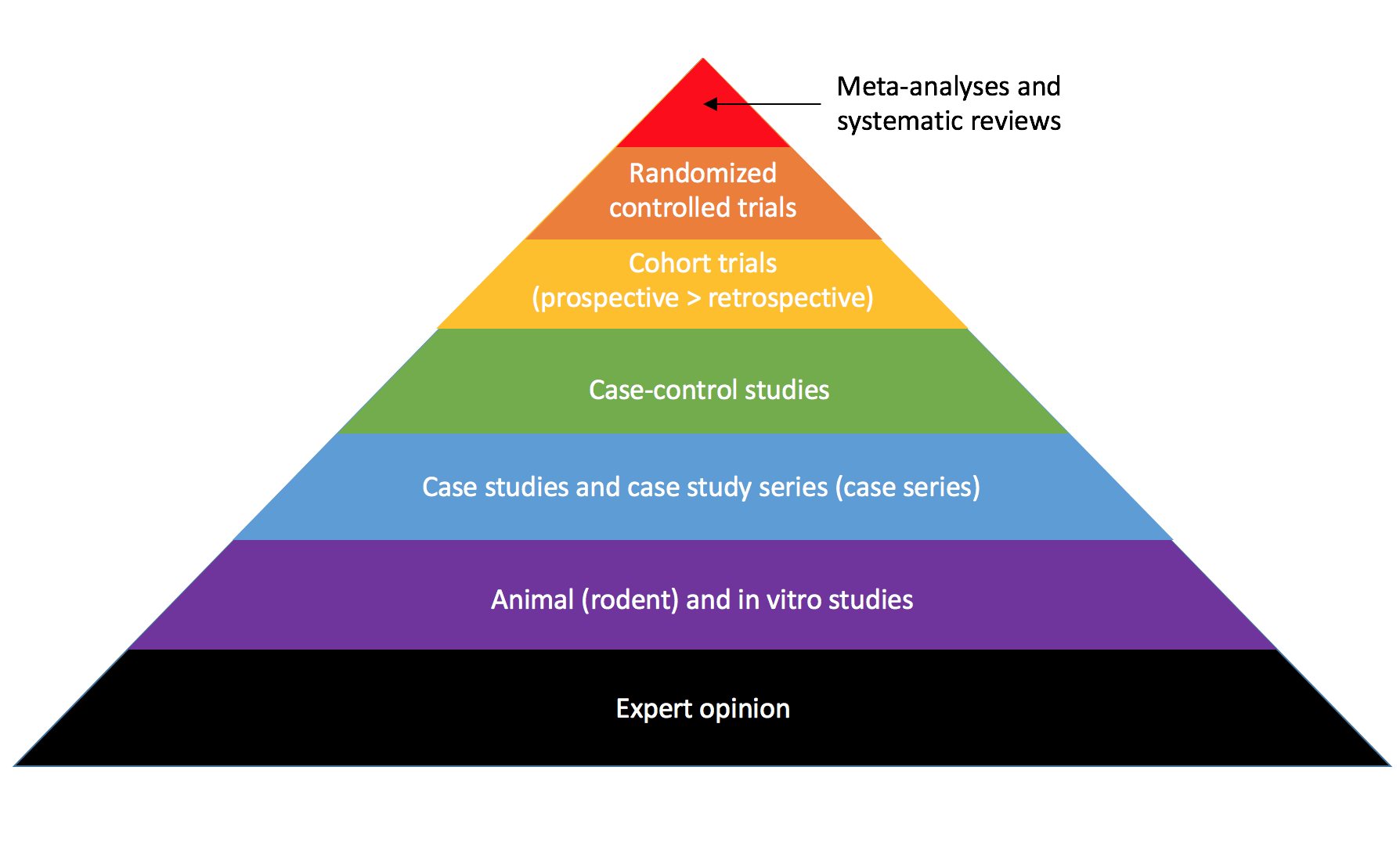 now convention that medical decisions be based on the best available evidence.  The quality of evidence is codified into a hierarchical and pyramidal scheme. The rationale goes, that if evidence is going to be a foundational element in clinical decisions and health policy, it should obviously be of the best quality and the most utility. It should not only be generalizable to the population but also be personalizable to the individual (future essay). It should directly demonstrate the effectiveness of the intervention at hand and should also be resistant to bias and confounding. In EBM methodology, evidence generated by double-blind randomized controlled trials (RCTs) resides at the top of the pyramid, whereas expert opinion and case studies reside at the base.  An explicit assumption of this scheme is that small amounts of higher-level, higher quality evidence outweigh larger amounts of lower-level, lower-quality evidence.

The concept of evidence, borrowed from law and adopted by science, has singularly transformed the world in the past few hundred years. Evidence-based sciences place very little faith in deduction; reasoning from the way something ought to work, to how it will work. Rather, knowledge is derived inductively – from evidence to theories. ‘Evidence of’ and ‘evidence for’ form the basis of our justifications and judgments. The symptoms are evidence of a heart attack, so we will run tests to verify. The evidence for a heart attack included an abnormal EKG and elevated cardiac enzymes, so we performed an angioplasty to treat. Although medicine has followed suit in the successes of the physical sciences and taken the empiricist turn; what is unique in medicine is the concept of evidence quality that is codified in a pyramidal scheme. Although this hierarchy is a useful heuristic, it can neglect the fact that reliable and quality evidence can come from disparate sources and that using evidence requires judgment about its validity and implications for its particular contexts. In the next few essays, I will describe the various evidence sources and the implications of this hierarchy for clinical decision making.

1 thought on “Evidence of, Evidence for”