My wife and I recently spent a magnificent three weeks in Southern Africa. We were amazed at the wildlife in Botswana’s and Namibia’s national parks, which are the closest approximation of the freedom the animals enjoyed in their past. Unlike the not too distant past, the watering holes scattered around Etosha National Park were the centerpiece of activity in the hot Namibian sun. Watching a herd of carefree baby elephants playing in the water with their mother keenly aware of her surroundings or observing the reaction of impalas, kudus, giraffes, or zebras as they are alerted by the presence of a lion are memories that will be forever imprinted in my brain. However, one experience that stood out above all else was the guided walk in the Okavanga Delta in Botswana. The delta is essentially an oasis in the Kalahari desert of Southern Africa. The majority of the estimated 200,000 large mammals in and around the delta are not year-round residents. They leave with the summer rains to find renewed fields of grass to graze on and trees to browse, then make their way back as winter approaches. This was the one place where it felt like these animals retained some of their freedom and were somewhat untainted from the advances of civilization.

We started the walk from our camp early morning on a mokoro and distinctly remember the feeling of excitement and anticipation as we rowed down the delta just as the sun was rising. As we headed down the river, we saw an enormous African elephant watching us with curiosity as he vociferously pulled out the grass from the ground. Upon disembarking from the mokoro, the guide gave us instructions and our “safety talk.” He told us that we must walk in a single file line and stressed the importance of maintaining that structure. To make sure we complied, he highlighted the fact that it was against the law in Botswana for guides to carry rifles and he was only armed with a pen-sized gadget that replicated the sound of a rifle. Furthermore, he talked about specific safety maneuvers that we should remember in the event that we have a threatening encounter with an animal. For example, he told us that if we were in between a hippo and water, to immediately get out of the animal’s way. Or if we were face-to-face with a lion, to look it straight in the eye, roar, slowly retreat and hope that the lion stands down. I wondered if I would have the presence of mind to remember those instructions if faced with the apex predator of the jungle.

I love going on hikes for all of the exploration, the physicality, and the nature, however, this particular walk had an added layer of “nature.” There were no signs, no trailheads, and no trails. We were either wading through waist high grass or paths cleared by hippos and elephants. The guide started walking down a seemingly random path but was utilizing all of his senses as he was listening to sounds emanating from the bush, looking at paw prints or vultures flying overhead, and even smelling for ani 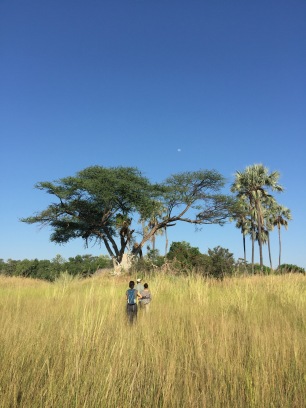 mal remains. We would make abrupt seemingly random turns and I tried hopelessly to imitate his movements, but could barely focus on walking through waist high sharp grass, avoiding the snake holes in the ground, and navigating the uneven terrain. However, our guide was in top form as about fifteen minutes into the walk he spotted a hyena in the distance and immediately turned and led our group in that direction. As we walked towards the hyena we spotted a second and then a third one carrying an object in its mouth. The hyenas soon saw us approaching, dropped the object, and ran off but repeatedly turned around to watch our movements. Upon arriving to their site, we identified a buffalo head (from its horns) with its face eaten to the bone and subcutaneous fat and skin overlying the scalp. The pack of hyenas continued to watch us from a distance as we were seemingly intruding upon their breakfast. I wondered if this fear of humans is a newly learned response to us being the apex predators and how this interaction would have been different when we were only armed with stones and spears. Nevertheless, the guide continued our walk but this time his attention focused on a group of vultures perched on the tree. We started off in that direction and he pointed to “fresh lion paws” on the ground. He told us to be on high alert because he suspected lions in the immediate vicinity and reminded us to to remain in a single file line. My heart was racing as my adrenaline-mediated flight or fight response was on full blast. I tried to sharpen my senses and strained to look for lions within the grass but realized that they are perfectly camouflaged by the length and color of the grass. Without any practice in this environment, my senses were woefully inadequate and our life was mostly in the hands of our guide. Time seemed to stand still as we followed him to the watering hole where the remainder of the buffalo carcass was scattered. The rib cage, the vertebral canal, and long bones completely cleaned of their meat and internal organs. Between the lions, the hyenas, the vultures, the bacteria, and all the other living and non-living parts of the ecosystem, this buffalo was fully utilized and probably served its “purpose.” Just like a detective at a crime scene, the guide deconstructed “the kill” from clues such as paw prints and the location of the watering hole in relation to the carcass.
In reflecting back on this walk, the combination of the walking and the lack of mechanized transport removed all of the distance between us and the wildlife. It was as if I was experiencing a time in history when we were cohabitants with these magnificent animals rather than passive tourists or imposing captors and trophy hunters. I felt an eerie connection with my evolutionary roots. Furthermore, the exploring, the discovering, the walking, the attention, the feeling of danger and novelty produced a state where time seemed to stand still. Concentrating was effortless and I was completely immersed in that moment without thinking about future tasks or past regrets. Such complete immersion in the activity is the hallmark of the dopamine induced flow state – a delightful combination of calm and excitement that we experience when completely absorbed in a challenging activity. This deeply positive psychological experience did not occur by coincidence or randomness. Locomotory flow or wayfaring occurs when we experience full sensory immersion while on the move. Evolutionary, it was a deeply significant activity for our hunter gatherer ancestors as their survival was often dependent on being able to utilize all of their senses to explore, navigate, and acquire knowledge from new and unfamiliar terrains. It is the equivalent of an impala walking cautiously to the watering hole, utilizing its senses to assess danger or a lion having intimate knowledge of the terrain to stealthily plan its ambush. In this short two hour walk, we were able to tap into this evolutionary significant psychological state that has largely been subdued by the advance of civilization. It is no surprise, many of us yearn for the wonders of nature through activities such as hiking and camping. As Rebecca Solinit writes in Wanderlust, a “certain kind of wanderlust can only be assuaged by the acts of the body itself in motion, not the motion of the car, boat, or plane. It is the movement as well as the sights going by that seems to make things happen in the mind, and this is what makes walking ambiguous and endlessly fertile: it is both means and end, travel and destination.”