The rise in modern human life expectancy is one of the crowning achievements of the scientific revolution. Throughout the world, life expectancy has increased exponentially over the last two hundred years directly due to technologies such as refrigeration, sewage, clean water, fertilizers, indoor living, antibiotics, and vaccinations. Through these technologies, we began to insulate ourselves from the hazards of the natural world – for the most part, infectious disease, predation, accidents, and food insecurity became threats of a bygone era. The largest gains in the metric of life expectancy were achieved by decreasing infant and childhood mortality and subsequently by decreasing death rates in the middle regions of the lifespan. However, hidden within this success, is the suggestion that there is an upper limit to human lifespan.  The longest living member of the species has not changed for more than twenty-five years. Improvements in survival tend to decline after the age of one hundred and there is no evidence that humans can routinely live past the age of a hundred and thirty years. Evidence strongly suggests that the maximum lifespan of humans is fixed and subject to natural constraints.

Nevertheless, history and myths abound with stories of ambition and hubris – two sides of the same coin. From Icarus and Achilles to Napoleon and Alexander, humans have consistently ignored the absence of evidence, dared to circumvent constraints, and imagined impossible counterfactuals. In some ways, the ability to do this is the defining feature of the species. In the vernacular, these attempts are called “moonshots.” One “moonshot” that has been at the forefront of human consciousness for the history of consciousness is discovering the fountain of youth. Questions such as ‘what if we can reverse aging’ and ‘what if we can live forever’ are well represented in myths and history. No differently, entrepreneurs in our society sell a number of diets, drugs, and supplements that are promoted (without significant evidence) as anti-aging therapies. While these intrepid explorers entertain, promote, and sell the “impossible”, there is an evolved class of solutions that can decrease the rate and delay the quality of physiological decline associated with aging.

For the majority of homo sapiens history, we survived in harsh and competitive environments laden with threats such as infectious disease and food insecurity. Through evolution by natural selection, we obtained adaptive molecular mechanisms in response to these stressors. This response – termed hormesis – follo 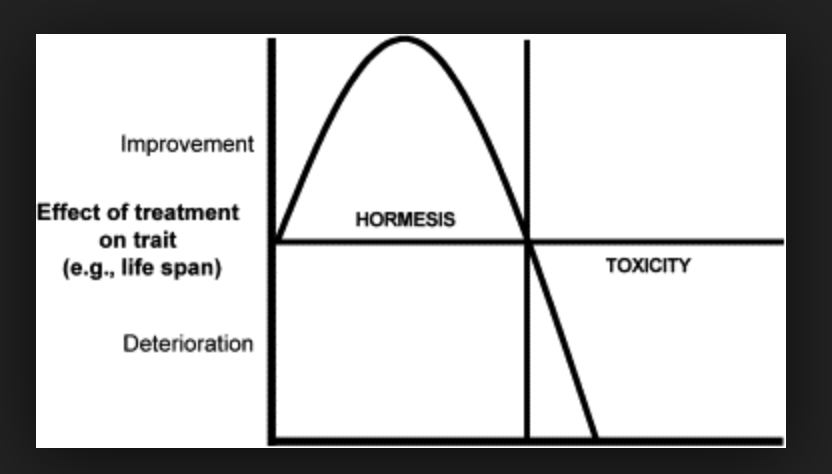 ws a classic biphasic dose-response curve.  At low doses, they yield a compensatory adaptive response but become destructive above a certain threshold. The hormetic response facilitates a protective suite of physiological responses that shield from future stressors. From increasing glucose sensitivity and increased parasympathetic activation to ketogenesis and immunomodulation, the hormetic response increases the likelihood of being able to respond favorably to future stressors. In other words, hormesis facilitates the ability of a system to maintain functionality in the face of some change or disturbance. If aging is a function of continuous wear and tear associated with transporting metabolic energy to our cells, then longevity is a function of being able to repair that damage – robustness. When cells in the body and brain are not challenged, they become complacent and consequently become vulnerable to injury and disease. In fact, the hormetic response – from vitamins to vaccinations – is characteristic of many biological systems and could be considered a fundamental principle of biology.

In many ways, aging, senescence, and death are the final manifestations of the failure of robustness – the inability to respond to endogenous and exogenous challenges. Interestingly, the same technologies that have served to increase life expectancy – food, antibiotics, heat – also work to suppress the hormetic response. In our engineered and sterilized world of decreased energy expenditure and caloric excess, these adaptive mechanisms are largely turned off leading to a decreased ability to respond to future stressors. Fortunately, for many of us in the modern world, it is not the lack of food that is a threat but the abundance of food, it is not the threat of energy over-expenditure but under-expenditure, it is not contaminated environments but the overly sterile ones. Controlled exposure to physical stressors such as exercise and cold, biological stressors such as intermittent fasting, and chemical stressors such as pro-oxidants and heavy metals might contain the secrets to delay and postpone the deleterious effects of aging. In theory, these problems should be more tractable because they do not necessarily require technological revolutions but perhaps the resuscitation of the antiquated Aristotlean virtues of temperance and prudence?