In my last essay, I not only described the historical underpinnings of the model of homo economicus but also described it as a foundational element of modern economic theory. Homo economicus is the smallest unit of analysis in economic theory and is characterized as a solitary agent, calculating in his utility, solely driven by competition, and insatiable in his desire to maximize his utility. However, modern neuroscience, psychology, cognitive science, behavioral economics, and evolutionary biology in a trans-disciplinarian approach has started to question some of the foundational assumptions in the model and is empirically redefining the characterization of homo sapiens. Notions of humans as solitary agents with fixed utility maximizing preferences are being overturned by a picture depicting humans as social and interdependent with fluid, context-specific values in continuous feedback with social norms and expectations. Cooperation is just as much a facet of human nature as competition is. 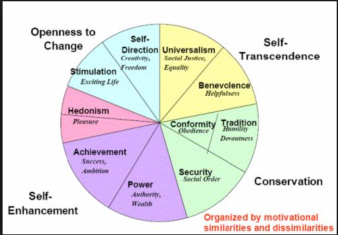 culture. The circular structure of the model portrays the total pattern of relations and the push-pull nature of the values and also confers the continuum of related motivations. For example, individuals or cultures that value novelty and change (stimulation) will likely undermine preserving time-honored customs (tradition) and vice versa. Interestingly, these values are not fixed preferences but context-dependent changes in an individual.  Not only do these values change at various periods of a lifetime, but also at several times throughout the day. Furthermore, the values can also be engaged or triggered by cultural and environmental cues. For example, when reminded of security, we are likely to take fewer risks, or when power and achievement are brought to mind, we are less likely to take care of others’ needs. These values define the framework that guides the selection of action or evaluation of actions.

Whether it was tribal chieftains and kings in the past or modern governments and policy makers, behavioral modification has always been a conundrum for leadership. How do we steer behavior to benefit the community and the individual? In the past, social and cultural norms largely provided the foundation of behavior change. However, in the modern market driven times, schemes of behavioral modification is guided by the model of homo economicus and relegated to the realm of rewards and punishments in the form of subsidies and taxes. In many large scale communities, the results have been mostly mixed because price signals neglect the stronger network effect of the complex interplay of social norms and individual motivation and values. In fact, in an interesting social experiment, a daycare distributed fines to deter parents from picking up their children late. Paradoxically, the experiment backfired as the parents began to pick up their children even later, as the predominantly social norm of picking up your children on time was replaced by a price signal.

As has been well documented, health care as an industry is buckling under the pressures of cost containment and improving quality of care. Health care costs continue to rise, whereas health outcomes continue to plateau. New and innovating models of steering behavior at all stakeholder levels from patients adhering to treatment regimens and strategically disincentivizing physicians from over-testing, to tying reimbursements to patient outcomes are being touted as strategies to curb costs and improve care. However, these carrot and stick measures are examples of price signals that consistently discount the importance of social norms and intrinsic motivations as sources of behavior change, and consequently, do not achieve deep or lasting change.

More than two millennia ago, Confucius provided advice on how to steer behavior. He stated, “guide them with government orders, regulate them with penalties, and the people will seek to evade the law and be without shame. Guide them with virtue, regulate them with ritual, and they will have a sense of shame and become upright.” However, more recently we have fallen into the trap articulated by David Hume, “where policy writers have established it as a maxim, that, in contriving any system of government…every man ought to be supposed a knave, and to have no other end, in all his actions, other than private interest. By this interest we must govern him, and by means of it, make him, notwithstanding his insatiable avarice and ambition, cooperate to public good.” As we set forth to design policies to steer behavior we must incorporate more fluid motivations and values as described in the value circumplex. To achieve deep and lasting social change, the most effective approach is to connect with people’s values and identity, not with their pocket and budget.