Almost 1.5 years ago, I wrote a blog piece titled Compassion Fatigue, in which I spoke about the high rate of physician burn out especially amongst front line physicians such as Emergency Physicians and Primary Care doctors. Anecdotally, the problem seems to be only worsening especially amongst ER physicians. There is not a week that goes by in the Emergency Department where I do not have a discussion with a colleague regarding his or her feeling of helplessness or with an older colleague who is literally counting down the days until “early” retirement. These physicians are essentially limping into retirement. The numbers seem to validate these anecdotes as a recent survey showed 52% of ER physicians are experiencing symptoms of burn out. In my opinion, the primary reason for these symptoms is the unending stream of non-emergent, chronically ill patients with complex psychosocial needs that are overwhelming these Emergency Departments.

Americans rely on emergency departments (EDs) to play a critical role in the health care safety net. Emergency care in the US costs $48 billion annually to care for approximately 136 million ED visits. Moreover, only 11.9% of these visits required a hospital admission, and therefore, approximately 121 million visits could potentially be seen at alternative sites (ie urgent care, primary care doctors) or treated remotely. Similarly, a 2013 study by Truven Health Analytics that examined insurance claims for more than 6.5 million ER visits found just 29% of ER visits required immediate attention. 24% percent didn’t require immediate attention, 41% received care that could have been provided in a primary-care setting, and 6% got care that would have been preventable or avoidable with proper primary care. Nonetheless, over the past decade, the increase in ED utilization has outpaced growth of the general population despite a national decline in the total number of ED facilities. In 2011, there were 421 visits to the ED for every 1000 i 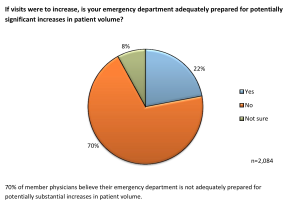 ndividuals in population. ED utilization reflects the greater health needs of the surrounding community and may provide the only readily available care for individuals who cannot obtain care elsewhere. The ED provides convenient after-hours and weekend care, and it offers patients immediate reassurance about their medical conditions. However, these increased volumes are overwhelming the capacity of current EDs and putting an unbearable strain on Emergency Physicians. Since the passage of the Affordable Care Act (ACA), ED visits have increased at an even more rapid pace. In an alarming poll released by the American College of Emergency Physicians (ACEP), 75% of ER physicians polled stated that ER visits have increased since the passage of the ACA, 70% stated that the ED is inadequately prepared to handle additional increases, and 64% state they have increased demands of their time in coordinating outpatient care following visits to the ED. This survey was consistent with a study in Oregon that showed that ER visits increased by 40% after improving access to health insurance.

In summary, the strain placed on EDs and its staff is increasingly becoming unsustainable and possibly inflicting irrevocable harm to frontline ED physicians. We not only have to provide acute, emergent care but also have to increasingly coordinate care for extremely complex, chronically ill, and under-resourced populations. It is any surprise that 52% of ED physicians are bending under these stressors and showing symptoms of burnout? Healthcare organizations must devise aggressive and systemic technological and processes based solutions to divert non-emergent patients from the ED. Technologies such as telemedicine must be utilized to triage, treat and coordinate care for non-emergent patients. Imagine a scenario where a patient calls a nurse advice line and/or 911 and is directed to an app based telemedicine service that will be able to monitor the patient’s vitals and subsequently make a more informed recommendation. Patients will be either treated at home, dispositioned to urgent care or primary care offices, or even have outpatient specialist or radiology appointments made for them. This in turn would decrease ED volumes and free the ED to care for acutely sick patients. In order for technologies such as described above to become pervasive, we will need overcome regulatory, legal, and financial hurdles associated with laws such as EMTALA, restrictions with telehealth credentialing, and incentives in the form of reimbursements. However, unless pervasive solutions are developed to safely divert non-emergent patients from the ED, we will continue to have strained ED’s staffed by overwhelmed and burnt out ED physicians.